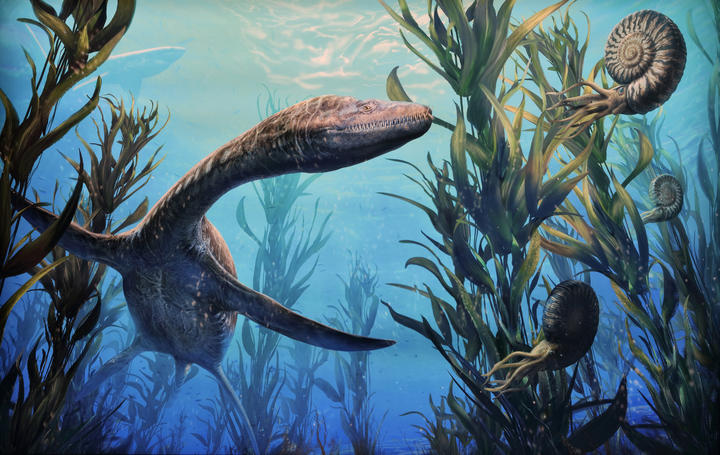 By Paul Scofield * from

New Zealand’s terrestrial dinosaur fossils are poor, with only a few bones, but the collection of ancient extinct marine reptiles is remarkable, including shark-like mosasaurs and long-necked plesiosaurs.

Work of a plesiosaur
Photo: AFP

They are best known for the fanciful but alluring idea, suggested by British scientist Sir Peter Scott, that the legendary Loch Ness monster was in fact a plesiosaur that outlived all other giant reptiles and remained undetectable throughout. the history of mankind.

In a recent research project, we used CT medical imaging to scan plesiosaur fossils collected in New Zealand in 1872.

Scans reveal a new level of detail, confirming that plesiosaurs mostly swam with their heads bowed, unlike the Loch Ness creature, and showing a close connection between New Zealand fossils and South American specimens from 70 years ago. million years.

Von Haast had heard that explorer and amateur scientist Thomas Cockburn-Hood discovered important reptile fossils in the upper Waipara Gorge in the Canterbury region. Cockburn-Hood described the area as “the dinosaur beds”, and we now know that marine sediments have preserved fossils from 70 million years ago.

McKay went to the Waipara in the winter of 1872, and he had spectacular success, collecting several partial skeletons of marine reptiles and hundreds of bones.

Among this material were two groups of rather unimpressive compressed and semi-spherical bones. These were in the storerooms of the Canterbury Museum, unidentified and stuck inside the concretions they were excavated in, for over 120 years.

It was not until the end of the 1990s to realize the importance of the fossil. Museum preparer and famous fossil collector Al Mannering and his colleagues prepared these two unloved fossils, chipping the stone to reveal the bones contained in the rocks.

Visiting English scientist Arthur Cruickshank believed these fossils were remarkable and possibly similar to the plesiosaur material he had seen from South America.

In 2004 Norton Hiller and Mannering, curator of geology at the Canterbury Museum, published an article in which they suggested that the two groups of bones, the size of soccer balls, were in fact two sides of the skull of the same animal – one remarkably similar to the plesiosaurs of South America.

In 2014, internationally renowned marine reptile experts Rodrigo Otero (University of Chile) and Jose O’Gorman (Museo de La Plata in Argentina) visited New Zealand and examined the specimens. They concluded that Hiller and Mannering were right. The two halves were indeed from the same animal, and the Waipara fossil most closely resembled a group of plesiosaurs hitherto only known from Chile and Argentina.

They described in detail the specimens in the Canterbury Museum and gave them the scientific name Alexandronectes zealandiensis, Latin for the swimmer Alexander of Zealandia. 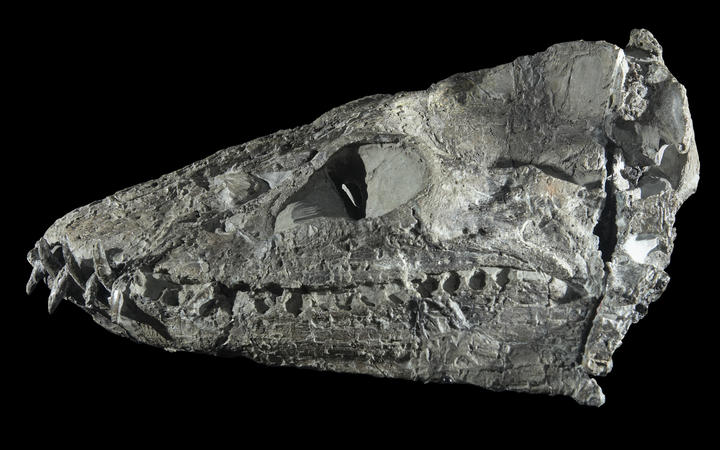 Skull of the elasmosaurus Tuarangisaurus keyesi, a long-necked marine reptile about eight meters in length that lived around 80 million years ago, along with dinosaurs.
Photo: Specimen from the national paleontological collections, GNS Science. Photography Marianna Terezow

Science and technology advance and the O’Gorman team wanted to confirm the evolutionary relationships of Alexandronectes zealandiensis, using the latest technologies.

In 2019, I took the two fossils to the hospital to be scanned by CT, using the latest dual energy CT scanners at St George’s Radiology in Christchurch. The results were extraordinary, showing novel anatomical features.

Without CT technology, these details could only have been seen by destroying the fossil. We examined the creature’s inner ear and concluded, based on the orientation of the ear, that it maintained a posture in which its head was usually held either perpendicular to the body or just slightly below the body. (not like Loch Ness Monster fans would maintain, up in the air like a puppet).

We also saw a feature known as the stirrup, also previously unseen in plesiosaurs. The stirrup is a small, umbrella-shaped bone in the middle ear that transmits vibrations from the eardrum to the inner ear.

This work led us to conclude that Alexandronectes zealandiensis was an unusual plesiosaur.

It belonged to a unique group of southern hemisphere plesiosaurs now called the Aristonectinae. This group was part of the plesiosaur family known as elasmosaurs. They were the latest experiment in the evolution of plesiosaurs, with the longest neck of all plesiosaurs.

* Paul Scofield is adjunct professor at the University of Canterbury

Ranking the top 5 favorites for the 2022 FIFA World Cup